The Crate in the Middle of MIA 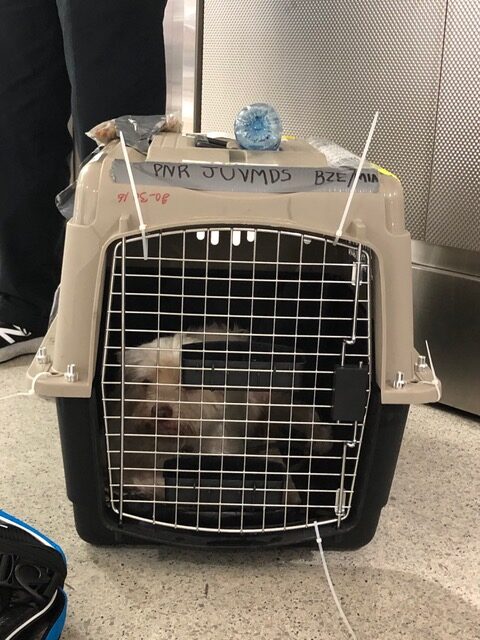 This is a blog for all of us who’ve worried about air travel with a beloved pet.  Our first worry is usually how our pet will be effected in flight, we hardly ever consider the possibilities that something can go wrong on the ground.  Here’s a story about just how much can go wrong on terra firma.

Two weeks ago, my husband and I returned from a week in Antigua via Miami International Airport.  We were traveling with many couples who shared our tennis vacation and after saying our goodbyes at the baggage claim area, we started making our way to pick up our car.  We were elated that we’d be home at a decent hour….or so we thought.

As we made our way towards the exit, we passed a bank of elevators on our left. Right there, haphazardly thrown between two elevators was a medium sized pet crate.  I stopped dead in my tracks, dropped my bags and peeked inside.  There was a little white dog, flattened at the bottom of the crate.  I looked at my husband.  He knew the drill.  “I guess we aren’t getting home at a decent hour anymore.”

I thought it odd that a dog would be left in the middle of the Baggage Claims area.  To my right there was a Large Luggage area, loaded with golf clubs, surf boards and baby strollers.  A guard stood by, checking bag claims to make sure no one stole the luggage, yet, there sat this dog, alone. People walked right by the crate, some slowing down, some peering inside, some getting off and on the elevators, yet not one person bothered to ask why an animal sat unclaimed in the middle of the airport.  Not one.  Let that sink in.

The flight information on the top of the dog’s crate indicated that she had traveled from Belize and was on her way to Houston.  A note indicated that she’s last been fed and walked at 10:00 am.  It was now 6:30 pm.  The crate smelled of urine and yet, this little girl wagged her tail and licked my hand through the crate door.
I asked a random cop what the deal was and got a disinterested shrug in return.
“Is this where all animals are left?”  I asked.

“Excuse me, who can I speak with to see what’s going on with this dog?”

A shrug.  I told my husband to stay with the dog.

I approached two woman sitting behind behind a desk.  The younger one was playing something on her cell phone and the older one was screaming at someone into hers.  I asked them what they knew about the dog.  The older woman shot me an irritated look and told me that the dog had been there for several hours.  I shot her back an incredulous look.  She told me the owner was probably detained in customs.

I was shocked to learn that if an owner was detained, his animal would be left to fend for itself out in the open.  I asked the woman what would happen if the owner never made it to pick up his pet and she replied that the animal would spend three days at the airport and then sent to Animal Care and Control.  WHAT?  I had so many questions that I fired at her.  Who watches the animal?  Where is the animal kept?  What happens at ACC?  (We all know what happens, after three days an owner surrender is usually put down). Can I take the dog?  Can I speak to a supervisor?  The woman had stopped listening to me.  I was losing my mind and becoming increasingly frustrated.

I ran back to the crate.  There was a number on top, which I called.  A woman picked up.  She explained to me that yes, the dog was her husband’s and he was connecting to Houston.  He flew from Belize and thought that the dog, Missy, would make the connecting flight.  He was totally unaware that he had to claim her and check her back in.  He was currently sitting at the connecting flight to Houston’s gate.  He was oblivious to the fact that his dog was stressed out and wouldn’t make the flight to Houston.

The owner would need a wheelchair to take him back to pick up Missy.  His wife was frantic, asking how Missy was doing.  I assured her that Missy seemed to be Ok and that I would ask airport personnel for help in speeding up the wheelchair process.  I left my name and number on the crate with a note asking that if the owner failed to return, to please contact me and I would take the dog.  I returned to women at the desk.  Here’s where it gets in interesting.

When I approached her, the older woman turned to the younger one and in Spanish said, “Here comes the pest again.”  Now, I get it, I don’t look as if I speak Spanish, people express shock all the time that I can, but this dumb bitch crossed a line.  Showing an amazing amount of self-restraint, I politely explained the situation to her (in English) and asked if she could please expedite the wheelchair process.  She then went off on me, yelling that the owner was to blame, not her.  She told me to mind my own business.  She asked her desk mate, in Spanish, if I thought I was St. Francis of Assisi.  I calmly told her, still in English, that I didn’t give a rat’s ass who was to blame because an animal’s well being was at stake here.  I pointed out to her, still in English, that anyone could walk off with the dog and that the dog also needed to be walked and fed and could be in the early stages of distress.  Here’s what I got, “Not my problem honey.”   I asked her if I could move the crate closer to her desk area so the dog could at least be protected.  At this point, Missy had begun to bark incessantly.  What had started as a whimper, was now a full fledged call for help.  Her desperate barks filled the airport. The nasty old lady told me that if I touched the crate, she’d call the cops.

On que, a cop wandered over.  I started to explain to him the situation, when Nasty Pants interrupted and began telling him her version of events.  I’d had enough of her nonsense at this point and said to her in Spanish, “Please be quiet and let me finish.”   She got up and left the desk area.

The cop got on his walkie talkie and spoke to several people.  He reassured me that a wheelchair was on its way and that he would wait with Missy until her owner returned for her.  I thanked him, called the owner and his wife and updated them on the status. Within minutes, the owner called telling me that he was in a wheelchair on his way to pick up Missy.  I thanked the officer profusely.  I got his name and badge number too.

The next day, Missy’s owners called to tell me that she was home and adapting to her new life in Texas.  She’s been a street dog in Belize when “Bill” started feeding her.  After several weeks, she’d made her way into Bill’s life and he adopted her.  When his 4 year job was over in Belize, he returned to the States with Missy.  What a decent man, unlike the uncaring humans who so callously walked by Missy’s crate at MIA.

I wrote a letter to some bureaucratic agency within MIA, never expecting a reply, but I did find a website, “dogsonplane.com” that dealt with animals and airport travel.  I sent a copy of the letter to them and guess what?  They’re blogging about Missy’s ordeal!  It’s nice to know that there are people out there that are trying to help.
I get that some people will read this and roll their eyes.  Some will say that I’m yet another crazy dog person.  I’ll own all that, but here’s why I feel so passionately about helping animals, dogs especially- we domesticated them for our use and pleasure and they are totally reliant on us and yet we repay them by treating them like commodities and property.  I cannot, nor will I let that go.  I’m not asking you to go to extremes to help, or to donate tons of money (I secretly do on the inside), all I’m asking is that you take a little bit of time from your busy days and consider their plight.  Stop your car and safely remove a turtle from a road.  Use your Bluetooth to call in a dog running in and out of traffic.  Instead of buying a $5.12 designer coffee, make a small donation to a local shelter.  Think long and hard about dropping upwards of $3,000 on that designer Golden/pug/terrier/micro dog.  There are countless amazing dogs waiting in shelters for a chance to show you either how incredible they are, or they are counting down the days until they get destroyed.  I refuse to sugar coat this situation and will continue to fight alongside all of us who feel the same way.

Thanks for reading, please share if you are willing.    Happy Holidays to all of you and to all of your furry little friends.  xoxox