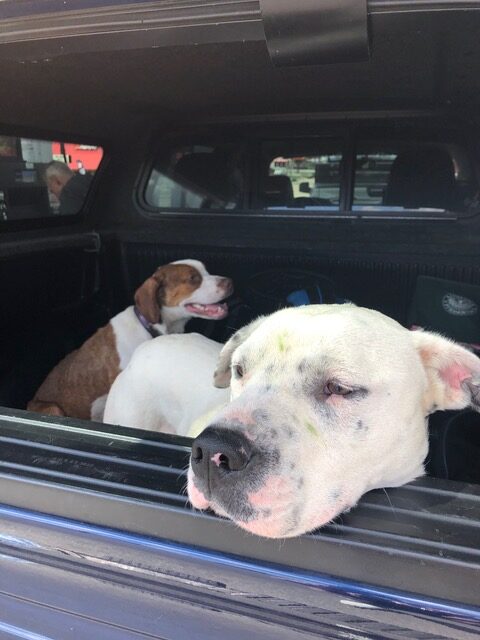 Good morning. Yesterday we were heading north to Michigan and when I looked to the right, I saw a brown and white Pittie/Hound mix hanging her head underneath the guard rail. My first thought was, “what a dejected looking dog.” My next thought was,

We were in the left lane doing 70 mph on a tight, two lane, winding highway, with cars and trucks everywhere.  About a half a mile later, but what felt like an eternity,  my husband finally managed to pull over. The truck hadn’t even come to a full stop and I already had a leash, some treats and my cell phone in hand.  I started running along the guardrail, uphill towards the dog.

I couldn’t remember exactly where I saw her, so I started to panic a little.  What if she’d wandered out in traffic?  What if she’d slid down the precipice on the other side of the guardrail?  Please, please, please still be there little one, I prayed to myself. And then I saw her.  When I finally reached her, I slowed down, jumped the guard rail to the grassy side and walked along the very narrow ledge. I slowly made my way to where she stood, in the same position she was in when I first spotted her.  She hadn’t moved.   I got down low and offered her some cookies. She was leery of me, but slowly made her way over.
I held still and patiently waited for her to approach. The traffic on the other side of the guard rail was dangerously close to us and the noise was deafening.  Suddenly, out of nowhere, another dog popped up to my right, on the highway side of the guard rail.  He was a large, white male Pit Bull with black freckles.  He wagged his whole body and ever so gently, he took the cookie from my hand.  What a happy boy! His girlfriend waited patiently as I broke off another piece of cookie and gave it to her.  As I fed the two dogs, I looped the leash over his head and snapped the leash onto the girl’s collar.  They both wore black leather collars with spikes, the kind you see on bikers.  I stood up slowly and began the long walk back to the truck, with the two of them trailing me.

I called my husband from the side of the road.

“I’ll explain later.  Can you please make a space for them in the back of the truck?”  (Note:  our truck has a covered bed.  The temperature was about 55 degrees so they could safely stay in the way back with the side windows cracked).
I can still see the expression on my husband’s face when we rounded the bend and came into view.  I smiled and waved happily.  He wasted no time laying into me.

“Yes, Wally.  This is girlfriend, Tallulah.  Let’s get some them food and water.”

“What are we going to do with them?” he asked.

“I don’t know, but I’ll figure it out.”  I said.  Isn’t that what every person who rescues an animal does?  Act first, plan later?
We loaded the skinny, dirty dogs into the back of the truck. Tallulah was a little standoffish, but perfectly happy to get off the road.  Wally just wiggled and licked us and practically leaped into the back of the truck.  As they voraciously ate and drank, I noticed that the ticks in her long hound ears were enormous.  Wally was covered in grass stains and fleas.   We settled them into the spare blankets we keep in the back and I know that while they were exhausted and confused, they must have been relieved to be safe.

Dickie and I checked on our two dogs and our foster dog in the middle section of the truck.  We continued our journey north and I started the  phone calls to my team of rescue warriors . The dogs had worn- out dirty collars. Neither one was fixed. Neither one was micro chipped. Both were friendly and grateful. They had been someone’s pets at some point, but it was obvious from the condition they were in, it had been a long time since they’d known the comfort and safety of a home. None of the local shelters had them listed as lost. Most of the shelters we called along the way would take them, but after 3 days would most probably euthanize them if no one came forward to claim them.  I couldn’t live with that.  I didn’t pull them off the highway to hand them over to someone who’d stick a needle in them.

After a lot of driving, I’d had no luck finding a safe place for them.  We stopped for lunch.  I walked them and pulled ticks off them (Note:  I HATE PULLING TICKS.  They’re disgusting. Removing them grosses me out and I’d rather perform open heart surgery).  As I was walking Wally, a social and goofy boy, I looked up and saw an animal clinic with their number painted on their entrance.  I took a chance and called them.

“Hi!  I found two dogs on the side of the highway.  They’re good, adoptable dogs.  Do you know of any shelters around here that might take them?”

“Why yes, the Young -Williams No Kill Shelter is just 13 miles from here.  You can try them.”  said the friendly and life saving receptionist.

We finished walking 5 dogs and managed to find the shelter.  The friendly and helpful staff took down all my information, the little I knew about Wally and Tallulah and promised to take care of them.  I hugged the dogs and traded my leashes for theirs.

I noticed their donation box on my way out and I wrote a check.  I will write them a check every June and thank them for taking in the Highway Dogs and for not euthanizing.

Who dumps their dogs on a highway?  How does one drive away from that?  What kind of a monster can live with themselves after performing an act like that?  What goes through the mind of a dog that’s left to fend for himself in a dangerous and unfamiliar environment?  And perhaps a question for each one of us, how can you see a dog in distress and just drive away?

Update on Tallulah and Wally:

They are being kept in separate but adjacent kennels in order to ensure that they both get enough food and water. They are sleeping in their kennels with blankets and the full attention of staff. No one has stepped forward to claim them yet….They will be examined by a vet in two days ( legally the shelter can’t do anything until 3 full days are up- unless they need to save their lives). Wally has me worried because he is coughing (heart worm?) and Tallulah probably needs postpartum nutrition.  I’ll keep all you animal lovers updated.

Thank you for your kind words and support. Your love for them and for helping them was an unexpected yet much appreciated surprise. I know all of you who’ve responded would have done the same. My intention was for everyone to spread the word on Spay, Neuter, Adopt and please don’t abandon. Please show your love for them by spreading the word. We can do so much better! THANK YOU ANIMAL POSSE!

Update on the Highway Hounds:

After dropping them off at the amazing shelter Young-Williams, in less than 10 days both Tallulah and Wally were adopted! WOOHOO!

I was very concerned that Wally would linger there, after all, he’s a large, male pit bull.  Shelters are full of that kind of dog.  I had every intention of picking him up on the drive back and try to get him adopted here in south Florida.  Thank goodness I didn’t have to go that route.  Tallulah is beautiful, low energy girl, so I know she is snuggling on a couch with someone as I type this.  Happy endings in animal rescue should be celebrated. I’m doing the happy dance like crazy.

Ok, so before you post about how stupid it was that I ran along a dangerous interstate to save two strange dogs, spare me. I get it, but I’d do it again and again and yet again.  Someone said to me that I didn’t act dangerously, but instead, I took a calculated risk.  Yes, that’s what I’m going with.  Believe me, I have to make those decisions every day here in South Florida when it comes to crazy turtles crossing the road.

This is a PLEASE SPAY AND NEUTER POST. PLEASE CHIP YOUR ANIMALS.#adoptfosterrescue#don’tabandonyour animals#spayneuterchip#volunteerinsomeway

Many times the most amazing companion is waiting for you at a shelter- through no fault of their own. Please try and think of that next time you’re looking for a furry friend.  That dog could be the love of your life.
Thanks for all the kind words and support. Thanks to YWR and thanks to Louie, Jill, Tiffany and Ellen. GIANT WOOF!